Bills interim head coach Anthony Lynn was reportedly a “virtual lock” as of this past Sunday to earn the job on a full-time basis, but that’s not necessarily the case anymore. There’s now buzz that Lynn might not even want to take over for his former boss, the fired Rex Ryan, according to Vic Carucci of the Buffalo News. 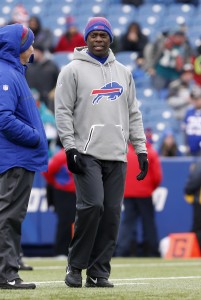 The 48-year-old Lynn has options outside of Buffalo, as it’s now official that he’ll interview with the Rams and 49ers, per Ian Rapoport of NFL.com (Twitter link). It’s also conceivable that any of the other teams with head coaching vacancies – the Broncos, Jaguars and Chargers – could court Lynn. Notably, the former running back played in Denver with then-quarterback and now-general manager John Elway. He also began his coaching career there as a special teams assistant in 2000.

Lynn drew some interest in head coaching searches last winter, but he was merely a running backs coach at the time. Then, after the Bills fired offensive coordinator Greg Roman in mid-September, Lynn took over and guided the unit to impressive results. Thanks largely to the NFL’s best rushing attack, the Bills’ offense finished the 2016 campaign 10th in both scoring and DVOA.

On the heels of Ryan’s late-December dismissal, Lynn earned the interim title for Week 17, though the Bills lost in embarrassing fashion, 30-10, to the Jets. In defense of Lynn, the Bills benched starting quarterback Tyrod Taylor for business reasons, leaving the coach with EJ Manuel and Cardale Jones as his only options under center. It now seems possible that could go down as Lynn’s only game as the embattled organization’s head coach.