The Bills named Sean McDermott as Rex Ryan‘s successor and are now in the process of determining who will be McDermott’s top defensive assistant. While the team has discussed bringing Panthers linebackers coach Al Holcomb to Buffalo as DC, Leslie Frazier‘s name is in the mix as well. 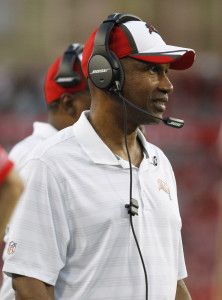 Frazier has emerged as the “name to watch” in this hiring process, Ian Rapoport of NFL.com reports (on Twitter). The 57-year-old Frazier spent this season coaching the Ravens’ defensive backs.

The former Vikings HC has history with McDermott, with each coach being on Andy Reid‘s staff with the Eagles from 1999-2002. McDermott served as a scouting assistant during Frazier’s Philadelphia tenure, and Frazier coached the Eagles’ DBs during that span. Frazier then moved on to become the Bengals’ DC.

Stints as DC in Minnesota and Tampa Bay sandwiched Frazier’s three-year HC tenure in the Twin Cities. Frazier’s final Bucs’ defense ranked as the league’s No. 10 unit in 2015.

Holcomb worked with McDermott for four years as well, serving as Carolina’s linebackers coach since the 2013 season.