It’s a done deal. The Bills are hiring Sean McDermott as their next head coach, Adam Schefter of ESPN.com tweets. Vic Carucci of The Buffalo News (on Twitter) hears that McDermott will receive a five-year deal. 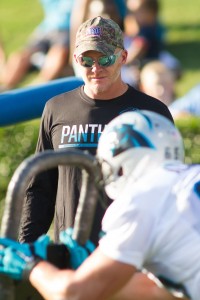 Initially, interim head coach Anthony Lynn appeared to be a shoo-in for the job, but amidst Lynn’s own reported trepidation about the partnership, the Bills conducted a thorough coaching search. Cardinals OC Harold Goodwin and Seahawks DC Kris Richard interviewed for the job while new Broncos head coach Vance Joseph and Eagles OC Frank Reich were named as candidates.

McDermott, meanwhile, was also a candidate for the Niners and the Chargers were looking to bring him in for a second interview. The Bills are crushing hard on the defensive guru they did not want to risk losing him to another team.

Meanwhile, McDermott has a solid relationship with former Chargers head coach Mike McCoy and Carucci hears hears that he would hire him as his offensive coordinator. McDermott’s likely DC in Buffalo will be Carolina linebackers coach Al Holcomb, a source tells Adam Schefter of ESPN.com (on Twitter).

5 comments on “Bills To Hire Sean McDermott As Head Coach”