The Redskins today interviewed incumbent Chargers defensive coordinator John Pagano for the same role on their staff, according to John Keim of ESPN.com. Pagano hasn’t officially been released from his contract in Los Angeles, but given that the Chargers are not only conducting interviews to replace him, but allowed him to meet with Washington, it’s fair to assume Pagano won’t be coaching in LA next season. 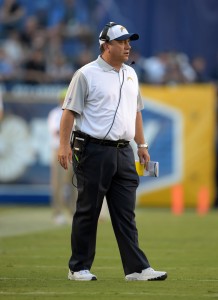 Pagano, 49, has spent his entire NFL coaching career with the Chargers, working his way up from defensive quality control to defensive coordinator, assuming the latter position in 2012. In his first four years on the job, the Chargers didn’t post a better defensive DVOA ranking than 18th, and finished last in the NFL in 2013. The defense turned in its best Pagano-led showing in 2016 (eighth), but that wasn’t enough to persuade new Los Angeles head coach Anthony Lynn to retain Pagano.

The Redskins’ search for a new defensive coordinator has become the most exhaustive hunt for a play-caller in the league, on either side of the ball. Counting Pagano, Washington has now been linked to 10 candidates as it looks for former DC Joe Barry‘s replacement. While former Jaguars head coach Gus Bradley was at one time viewed as the leading candidate, the Redskins have also expressed interest in three former Rob Ryan disciples (Rex Ryan, Dennis Thurman, and Mike Pettine), 49ers linebackers coach Jason Tarver, and will meet with their own LBs coach, Greg Manusky.