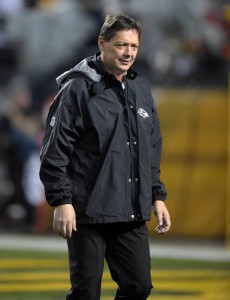 Dennison, 58, boasts an expansive offensive coaching career, and most recently served as Denver’s play-caller under former head coach Gary Kubiak. New Denver head coach Vance Joseph opted to overhaul the majority of the Broncos’ offensive staff, meaning Dennison and most of his assistants became coaching free agents. Dennison, who also coached alongside Kubiak in both Houston and Baltimore, will presumably bring his zone-blocking scheme to Buffalo, a dramatic shift from the Bills’ recent man-blocking run game.

In Dennison, first-time head coach Sean McDermott adds a veteran offensive mind after striking out during the early part of his search for a new coordinator. Former Jaguars OC Greg Olson was viewed as a favorite for the job, but ultimately spurned Buffalo in order to accept the Rams’ quarterbacks coach gig. Former Chargers head coach Mike McCoy and Chiefs co-offensive coordinator Brad Childress were also viewed as candidates, while the Bills last night interviewed Panthers QBs coach Ken Dorsey for the role.

What exactly Dennison is inheriting in Buffalo is unclear, especially at the quarterback position, where the Bills are fully expected to move on from incumbent quarterback Tyrod Taylor. Buffalo does feature one of the more impressive run units in the league (1st in rushing DVOA in 2016), but without knowing who will be under center Week 1, it’s difficult to evaluate how Dennison will approach his new job. Dennison does have a connection to Taylor, as he served as Baltimore’s QBs coach while Taylor acted as Joe Flacco‘s backup in 2014.