Teddy Bridgewater Likely Out For 2017?

The catastrophic knee injury that caused Vikings quarterback Teddy Bridgewater to sit out the entire 2016 season is also likely to cost him the 2017 campaign, a team source told Jason Cole of Bleacher Report (video link). Doctors have informed the Vikings that the best-case scenario for Bridgwater would be a 19-month recovery. His injury occurred last August, which means he’s unlikely to return to full strength until March 2018 at the earliest.

On the other hand, Bridgewater’s agent Kennard McGuire has strongly disputed Cole’s report, telling Ben Goessling of ESPN.com: “I would not overreact to a story that has zero substance and no credibility.” The Vikings have maintained there is no current update on Bridgewater’s status, while sources tell Andrew Krammer of the Minneapolis Star Tribune Bridgewater still has no “set timeline” for return. 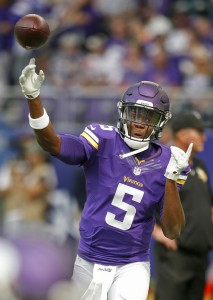 As of October, Bridgewater’s career was reportedly in jeopardy on account of the complete ACL tear and dislocated kneecap he suffered in practice. More recently, Vikings head coach Mike Zimmer expressed uncertainty earlier this month as to when Bridgewater might return. That came after Zimmer declared that Sam Bradford would be the Vikings’ starting quarterback to at least begin next season.

The Vikings’ decision to send their 2017 first-round pick and 2018 fourth-round selection to the Eagles for Bradford last September came in response to Bridgewater’s injury. Minnesota was the reigning NFC North champion at the time and hoping to keep its playoff chances alive, though it ultimately wasn’t able to replicate its 2015 success this season. That wasn’t necessarily the fault of Bradford, who set an NFL record for single-season completion percentage (71.6) and tossed 20 touchdowns against five interceptions as part of a conservative passing attack. Despite Bradford’s career-best statistical season, not to mention a 5-0 start, the Vikings stumbled to an 8-8 record and a third-place finish in their division.

Both Bridgewater and Bradford are set to enter contract years, though the former is controllable through 2018 by way of a fifth-year option. The Vikings are likely to exercise the option because it would give them another year to evaluate Bridgewater’s recovery, per Ben Goessling of ESPN.com. The 24-year-old Bridgewater, whom the Vikings chose 32nd in the 2014 draft, combined for a 64.9 percent completion rate and 28 scores against 21 picks in his first two seasons. Minnesota has posted an impressive 17-11 record in his 28 career starts.