The Dolphins are not moving on from Branden Albert after all. Hours after deciding to cut the left tackle and informing him of their plans to do so, Miami has decided to hang on to him – for now. Armando Salguero of The Miami Herald hears that after word of Albert’s release broke, the Dolphins heard from at least one team that had interest in working out a trade. Now, the Dolphins decided that they are going to investigate any trade possibilities out there before letting him go for nothing. 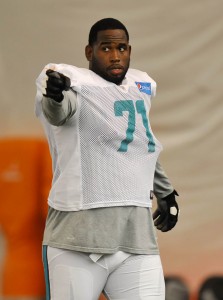 Albert was scheduled to carry a $10.6MM cap hit this season and releasing him would have saved $7.2MM. The team could also increase its immediate savings to $8.9MM by designating him a post June 1 cut. Before going down that path, however, the Dolphins first want to see if they can get some draft picks in return.

Albert, a exceptionally talented tackle, has struggled to stay healthy in Miami. In 2016, he made 12 starts and had a career-worst 42.2 grade from Pro Football Focus. The Dolphins drafted Laremy Tunsil last year with the idea that he would eventually play left tackle and, apparently, the future is now. He doesn’t have a place in Miami any longer, but other teams still want him despite his injury history and age.

The Dolphins currently have upwards of $40MM in cap room. If they trade or release Albert, they should have something closer to $50MM to work with.