At least five clubs are expected to express interest in Redskins wide receiver Pierre Garcon, according to Mike Jones of the Washington Post, who reports the Rams, Eagles, Bears, Cowboys, and 49ers are among the teams intrigued by the veteran pass-catcher. Garcon, for his part, would prefer to return to Washington, but as of earlier this week, the Redskins have not engaged in contract talks with the 30-year-old. 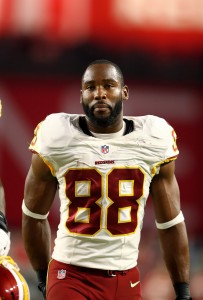 Los Angeles, Philadelphia, Chicago, and San Francisco are all engaged in various stages of rebuilding, and as Jones notes, each club would view Garcon as a “security blanket” as they continue to develop young quarterbacks. In the case of the Bears and 49ers, of course, that youthful signal-caller is likely not yet on the roster, but the Rams’ Jared Goff and Eagles’ Carson Wentz could each use new weapons as they head into their second NFL campaigns. Of the four clubs mentioned here, none finished higher than 16th in offensive DVOA in 2016, with Chicago leading the way and Los Angeles — dead last at No. 32 — rounding out the list.

The Cowboys, on the other hand, are in a different boat altogether, and are squarely in the 2018 Super Bowl conversation following a season that saw the breakout of quarterback Dak Prescott and running back Ezekiel Elliott, continuous excellence from the offensive line, and viable receiving threats that allowed the unit to rank third in DVOA. However, with both Terrance Williams and Brice Butler scheduled to hit unrestricted free agency next month, Dallas could be on the lookout for a dependable No. 2 wide receiver, a description that Garcon ably fits.

In his ninth NFL season, Garcon led the Redskins in both receptions (79) and receiving yards (1,041) while managing three touchdowns, and finished 10th in DYAR and 15th DVOA among wideouts. Coming off a five-year deal signed in 2012, Garcon averaged an $8.5MM salary during his time with Washington.