Defensive lineman Jason Pierre-Paul and Johnathan Hankins are both scheduled to become unrestricted free agents on March 9, but “word on the street” is the Giants will make a run at re-signing both players, according to Jordan Raanan of ESPN.com. 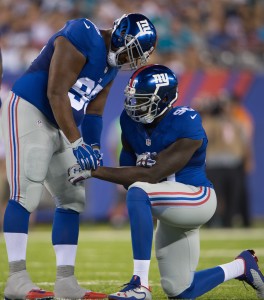 New York’s interest in retaining Pierre-Paul has been relayed before, and isn’t surprising given that he graded as the league’s No. 13 edge defender according to Pro Football Focus, helping propel Big Blue to a second-place finish in defensive DVOA. However, as one of the better pass rushers available, JPP won’t be without suitors should he reach the open market, which is why the Giants could consider extending him the franchise tag before free agency begins.

The franchise tender for defensive ends is expected to come in near $17MM, so a tag for Pierre-Paul would eat up a decent chunk of New York’s ~$31.5MM in cap space. But given that JPP has indicated he won’t accept another one-year deal (after being forced to sign for a single season last March), the franchise tag gives the Giants another option to keep Pierre-Paul around, especially when the alternative is handing him an offer comparable with Olivier Vernon.

Hankins, meanwhile, doesn’t have the track record of a Pierre-Paul, but at age-24, he’s one of the youngest players set to hit the open market, a fact which will certainly entice clubs. Playing next to Damon Harrison in New York’s base 4-3 defense, Hankins managed 816 defensive snaps, 10th-most among tackles, but graded as just the No. 72 interior player among 127 qualifiers, per PFF. A franchise tag for Hankins — unlikely as it is — would cost roughly $13.5MM.

The Giants spent the fourth-most cap space on defensive linemen in 2016, and if Pierre-Paul and Hankins are re-signed, may dart to the top of that particular ranking in 2017.

One comment on “Giants Attempting To Retain Defensive Core”