Giants Will Push To Re-Sign JPP

The Giants are parting with wide receiver and Victor Cruz and running back Rashad Jennings, whose releases will save the club $10MM in cap space. New York will attempt to use some of that money to retain its best pending free agent, defensive end Jason Pierre-Paul, as Mike Garafolo of NFL.com reports the team will “make a legitimate run” at re-signing JPP before the market opens March 9 (via Chris Wesseling of NFL.com). 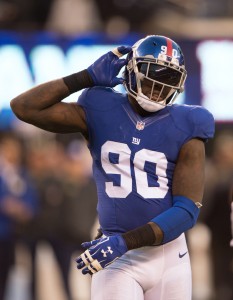 At this time a year ago, Pierre-Paul was coming off a season limited to eight games and one sack as he tried to move on from a gruesome July 2015 fireworks accident. Thus, he settled for a one-year pact last offseason to remain a Giant. Now that he has reestablished himself as one of the NFL’s premier pass rushers, Pierre-Paul is unwilling to take another one-year deal and could target a contract similar to the one teammate Olivier Vernon signed with the Giants last offseason. Then a free agent, Vernon inked a five-year, $85MM deal featuring $52MM in guarantees.

Vernon signed in advance of his age-26 season and had posted four straight 16-game campaigns, whereas Pierre-Paul is a bit older (28) and has missed 12 contests over the past two years. Pierre-Paul played in 12 games before his 2016 ended in December on account of core muscle surgery, though he showed well with seven sacks and three forced fumbles. Pierre-Paul also ranked 13th among Pro Football Focus’ 109 qualified edge defenders and totaled the league’s 15th-most QB hurries (24).

Pierre-Paul has clearly set himself up for a raise, one that could lead the seven-year Giant to a new franchise, though Big Blue has used the franchise tag on him in the past and could do so again. At an estimated $16.955MM, the tag will be worth around $7MM more than Pierre-Paul’s $10MM salary from last season.

3 comments on “Giants Will Push To Re-Sign JPP”