This is shaping up to be a busy day for the Giants. The G-Men are releasing former starting running back Rashad Jennings, according to Jordan Raanan of ESPN.com (on Twitter). 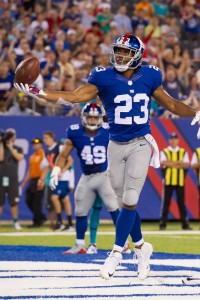 Jennings was set to carry a cap charge of $3MM. By releasing him, the Giants will save $2.5MM.

The veteran running back was brought to New York in 2014 with the idea that he would be the team’s workhorse in the backfield. Instead, injuries held him back in two of his three seasons. In 2016, he averaged a paltry 3.3 yards per rush on 181 carries. Jennings made a name for himself in 2013 with the Raiders when he averaged 4.5 yards per carry and scored a career-high six touchdowns. Now on the verge of his 32nd birthday, it’s fair to wonder if he can get back to that level of production.

The Giants are now expected to turn to youngster Paul Perkins to hold down the running back job. As it stands, the Giants also have veteran Shane Vereen on the books for one more year at a roughly $5MM cap charge.