Lorenzo Alexander To Get $10MM Per Year?

On the heels of a shockingly effective season in which he earned a Pro Bowl nod and second-team All-Pro honors, journeyman linebacker Lorenzo Alexander is preparing to land a significant raise in free agency, as CBS Sports’ Jason La Canfora writes in a piece that’s worth a full read. Alexander could end up with a short-term contract worth $5MM to $10MM per year, his agent, Peter Schaffer, told La Canfora. 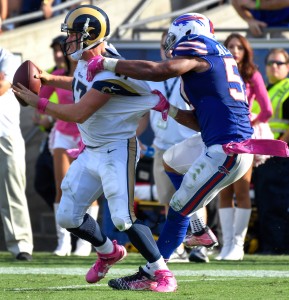 The success Alexander had in 2016 with the Bills was completely unexpected, as evidenced by the fact that the longtime special teamer had to settle for a minimum salary benefit deal last April. Alexander went on to find a home in now-former Bills head coach Rex Ryan‘s defense, though, as he notched 76 tackles, 12.5 sacks, three forced fumbles and an interception in his age-33 season. Remarkably, Alexander entered 2016 having combined for nine sacks, four forced fumbles and no picks over the first nine years of his career, which he divided among the Redskins, Cardinals and Raiders.

Since his breakout season in Buffalo concluded, Alexander has stated that the Bills want him back, but he’s noncommittal about where he’ll play in 2017. Alexander, who’s listed at 245 pounds, would like to stay at his 2016 playing weight (235), he told La Canfora, who names a return to the Redskins, a reunion with ex-Washington defensive coordinator Gregg Williams in Cleveland, or a deal with the 49ers as possibilities. Staying close to his native Oakland would be a boon for Alexander, per La Canfora, which could tip the scales in the 49ers’ favor.

2 comments on “Lorenzo Alexander To Get $10MM Per Year?”