Panthers linebacker A.J. Klein said he’ll be looking for a starting gig when he hits the open market next month, according to SiriusXM NFL Radio (Twitter link). 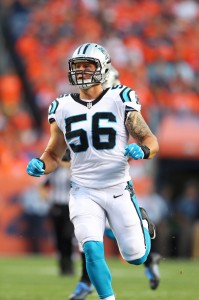 As Klein alluded to in his interview with SiriusXM, he’s been stuck behind one of the best linebacker duos in the league for the duration of his career. Klein, 25, is a fine reserve, but he’s no Luke Kuechly or Thomas Davis, and was never going to usurp either player for starting time. Carolina used a first-round pick on fellow ‘backer Shaq Thompson in 2015, further decreasing any chance Klein would venture into the club’s starting lineup.

While Klein hasn’t been a regular during his time with the Panthers, he has averaged roughly six starts per season over the past four years thanks to injuries along Carolina’s linebacking unit. In 2016, though, Klein only played on about a third of the Panthers’ defensive snaps, but did see action on nearly half the club’s special teams plays. All told, he managed 29 tackles, one sack, and two forced fumbles.