UFA interior defender Vance Walker paid a visit to Chicago for a Bears summit, Jeremy Fowler of ESPN.com tweets. The Broncos are still interested in retaining Walker, per Fowler, but the key factor here is how Walker recovers from the ACL tear he sustained last August. 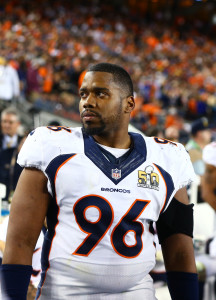 The Broncos signed both Zach Kerr and Domata Peko to help fortify a defensive line that saw both Walker’s and Sylvester Williams‘ contracts come off the books and one that didn’t possess much depth compared to its Super Bowl championship season. Denver was interested in retaining Walker, who was slated to start at right defensive end opposite Derek Wolfe last season prior to the knee injury, in February as well.

Walker spent two seasons in Denver, serving as a backup behind Wolfe and Malik Jackson in 2015 and watching Jared Crick function as a starter in ’16. The Bears could use some depth at their end spot, with Akiem Hicks fronting a somewhat thin unit presently.

Formerly with the Falcons, Raiders and Chiefs, Walker made 32 tackles and recorded two sacks during his most recent healthy season. He turns 30 in April.

One comment on “Bears Host Vance Walker On Visit”