Five Teams In On Nickell Robey-Coleman

In addition to the Vikings, the Chargers, Dolphins, Steelers, and Titans are also showing interest in defensive back Nickell Robey-Coleman, Chris Tomasson of the Pioneer Press tweets. Robey-Coleman has found a healthy market ever since being discarded by the Bills earlier this month. 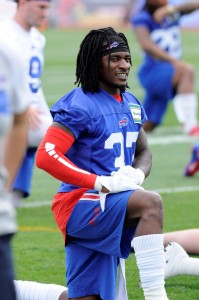 Last year, the slot cornerback earned a higher grade from Pro Football Focus than teammates Stephon Gilmore and Ronald Darby. All in all, he graded out as PFF’s No. 33 overall corner. He was set to make just $2.1MM this season, but Buffalo instead decided to cut him and save $1.65MM against the cap.

The Steelers had interest in Davon House before he signed with the Packers on Tuesday, so they are still in the market for help at corner. The Vikings are also a logical landing spot. They remain in pursuit of defensive back Lardarius Webb, but it’s possible that he could return to the Ravens on a cheaper deal.

3 comments on “Five Teams In On Nickell Robey-Coleman”