Colin Kaepernick To Stand For Anthem

Colin Kaepernick will stand during the National Anthem next season, sources tell ESPN.com’s Adam Schefter. After making headlines last season for his protest, Kaepernick does not want his display “to detract from the positive change that he believes has been created,” Schefter writes. 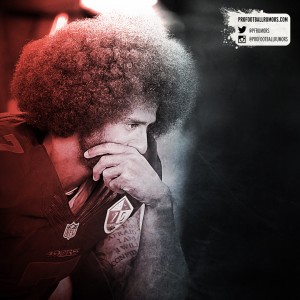 Normally, we wouldn’t cover this sort of thing at Pro Football Rumors, but Kaepernick is on the verge of free agency and this declaration could make a very real impact on his market. Teams are understandably wary of the media attention that Kaepernick would bring and his willingness to put his anthem kneeling on hold could make him more appealing to clubs.

Meanwhile, a return hasn’t been officially ruled out in San Francisco. General manager John Lynch said he and Kaepernick agreed to leave the door open for a possible reunion, Rick Stroud of the Tampa Bay Times tweets. Still, he will become a free agent on March 9.

Kaepernick doesn’t appear to be the player he once was, but he could still be a quality backup with some upside. He bounced back somewhat in 2016, tossing 16 touchdown passes against four interceptions. He also averaged 7.2 yards per passing attempt (up from 6.2 in 2015) and finished second among QBs in rushing yards (468, on a lofty 6.8 per carry).

47 comments on “Colin Kaepernick To Stand For Anthem”