Defensive end Connor Barwin is set to meet with the Bengals on Monday, reports ESPN’s Adam Caplan (via Twitter). This will be the veteran’s first visit since he was released by the Eagles last week. 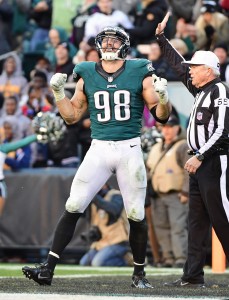 The former second-round pick joined the Eagles in 2013 after signing a six-year, $36MM contract ($8MM guaranteed), and he proceeded to make his only Pro Bowl appearance in 2014. The 30-year-old didn’t miss a game during his four-year tenure in Philly, starting all but one game. Barwin finished 2016 with 34 tackles, five sacks, and one forced fumbles.

Signing with the Bengals would be a bit of a homecoming for Barwin, who played 51 games for the Cincinnati Bearcats between 2005 and 2008.

The 49ers reportedly had interest in Barwin before he was let go by the Eagles.