Eddie Lacy could leave the Packers but stay in the division. The running back is set to visit the Vikings, as Ian Rapoport of NFL.com tweets, as well as the Seahawks. Lacy will also meet with the Packers. 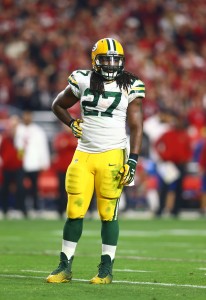 The Seahawks are obviously in the market for a veteran running back as they also have meetings scheduled with Latavius Murray and Jamaal Charles. Lacy would probably represent the most attractive option of the three, though he does come with some injury and conditioning concerns.

The Vikings are without a No. 1 running back after declining Adrian Peterson‘s $18MM option, but they’re obviously quite familiar with Lacy. The 26-year-old has thus far spent his entire career with archrival Green Bay, which selected him in the second round of the 2013 draft. Lacy has since recorded a pair of 1,100-yard rushing seasons, though his production has dropped over the past two campaigns. The ex-Alabama star averaged a so-so 4.1 yards per rush and posted a career-low three touchdowns over 187 carries in 2015, and after bouncing back with a 5.1 YPC through five games last year, he landed on injured reserve in October because of an ankle issue.

Lacy, who expects to be at full health by next month, made it clear in late February that the Packers wanted him back. Green Bay was unable to keep him from hitting the market, though, and will now have to compete with other teams for his services. Lacy stands as one of the top players available in free agency.