Free agent defensive lineman Lawrence Guy is visiting the Patriots today, Jason La Canfora of CBSSports.com tweets. Guy was drawing interest from the Dolphins and Redskins earlier this week, but it’s not immediately clear if they’re still in the mix for him after adding other defensive linemen on Thursday. 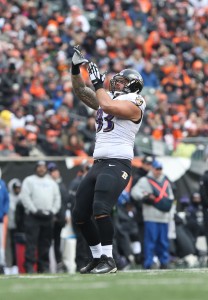 Trey Flowers had a breakout season for the Patriots, but they’re a bit thin at defensive end behind the former fourth-rounder. If Jabaal Sheard ends up departing the organization, that would leave the team with only Flowers and Geneo Grissom at the position.

Guy may not necessarily start if he was signed by New England, but he’d certainly provide some depth. The Patriots would also appreciate his versatility, as he could easily serve as a back up defensive tackle to Alan Branch and Malcom Brown.

Guy hasn’t missed a game over the past two seasons, earning 16 combined starts for the Ravens. After recording 4.5 sacks during the 2015 campaign, Guy finished the 2016 season with 28 tackles, one sack, and one forced fumble.

One comment on “Patriots Host DL Lawrence Guy On Visit”