The Ravens will sign running back Danny Woodhead, tweets Ian Rapoport of NFL.com, adding Woodhead is now fully healthy after suffering a torn ACL during the 2016 season. It’s a three-year deal for Woodhead, tweets Michael Gehlken. 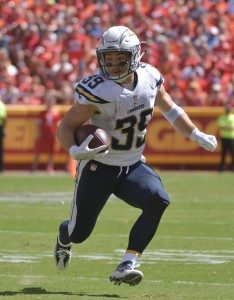 Woodhead, PFR’s No. 10 running back, was pursued by at least two other clubs in recent days, the Chargers and the Broncos. Despite spending the past four seasons with the Bolts, Woodhead is opting to head east for Baltimore. In sum, Woodhead’s decision may have simply come down to money, as freelance reporter Michael Gehlken reports (Twitter link) the Ravens “came strong” with an offer despite the interest from Los Angeles and Denver.

In Baltimore, Woodhead will join a backfield that ranked 21st in rushing DVOA and is currently manned by Terrance West (who received an original round RFA tender this week), Kenneth Dixon, Javorius Allen, and Lorenzo Taliaferro. If he is truly recovered, Woodhead looks like the easy favorite for third-down work in a Ravens offense that increasingly relied on the short passing attack in 2016.

Receiving prowess has always been Woodhead’s strong point, as the 32-year-old has managed more than 30 receptions four times, and twice gone over 75 catches. He’s been serviceable on the ground, as well, and could carve out a true rushing role in a Ravens offense that lacks a No. 1 RB threat. Injuries, however, have ruined two of Woodhead’s past four campaigns, as a broken fibula wiped out 2014 while the aforementioned ACL injury sidelined him last year.