Seahawks To Meet With Gerald Hodges 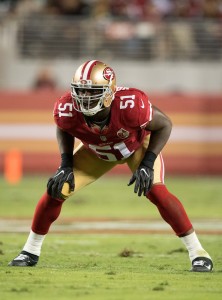 Seattle, of course, already employs two of the league’s best linebackers in Bobby Wagner and K.J. Wright, but the club does need to replace the production void left by Mike Morgan, who remains unsigned at present. Hodges, 26, could fill that role after playing for the division rival 49ers for the past season-plus.

Hodges started 12 games in 2016, playing on roughly half of San Francisco’s defensive snaps while grading as the NFL’s No. 21 linebacker, per Pro Football Focus. In 15 total games, Hodges racked up 80 tackles, three sacks, and two interceptions. He also chipped in on special teams (73 snaps).

Although he ranks as PFR’s third-best free agent linebacker, Hodges hasn’t generated much interest since the market opened. His only known visit came with the Chiefs earlier this month, but the two sides couldn’t agree to a pact.