Wideout Andre Roberts has drawn interest from several teams, according to ESPN’s Dianna Russini (on Twitter). The Patriots, Falcons, and Lions are among the teams eyeing the free agent receiver. 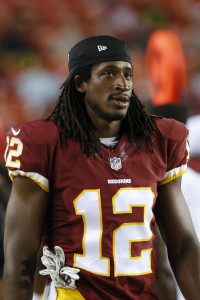 Roberts had a disappointing first season in Detroit, finishing with only 14 receptions for 188 yards and one touchdown. The 29-year-old’s best season came back in 2012 with the Cardinals, when he finished with 64 receptions for 759 yards and five touchdowns. The wideout also has nine career carries for 77 yards.

Roberts would presumably slide in as the Patriots’ fifth wideout, or he could potentially replace Danny Amendola in the lineup. He’d be competing with Devin Fuller and Nick Williams for snaps in Atlanta, while Detroit would presumably continue to use him behind Marvin Jones, Golden Tate, and T.J. Jones.