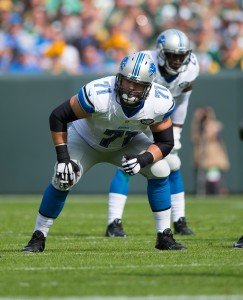 Minnesota lost out on fellow free agent Ricky Wagner yesterday, and also failed to re-sign incumbent left tackle Matt Kalil, who joined the Panthers. At present, it’s unclear exactly which position Reiff will play for the Vikings, but if the club doesn’t add another left tackle, Reiff will likely slot in on the blindside. Reiff played left tackle for most of his career before being displaced in 2016.

The Vikings fielded one of the league’s offensive lines last year, a distinction earned both through injury and poor play. Nearly every starting lineman went down with some sort of health issue in 2016, forcing the Vikings to turn to second- and sometimes third-teamers in an effort to keep Sam Bradford upgright. Reiff isn’t a start, but he’ll add stability to Minnesota’s front five.

Reiff had beeen in Detroit since it nabbed him 23rd overall in the 2012 draft. Aside from a 16-appearance, eight-start rookie year, Reiff has lined up with the Lions’ No. 1 unit dating back to his second season. The 28-year-old has appeared in no fewer than 14 games, all starts, in each season since 2013. He also has experience at both tackle spots, though PFF wasn’t that bullish on his work on the right in 2016, as it placed him a below-average 48th among 78 qualified OTs.