Earlier today, CBS Sports’ Jason La Canfora reported the Browns were still mired in a Myles Garrett-vs.-Mitch Trubisky debate despite the former being the consensus top talent in the draft. More came out of Cleveland on Friday night to support the Browns are legitimately considering the North Carolina product. 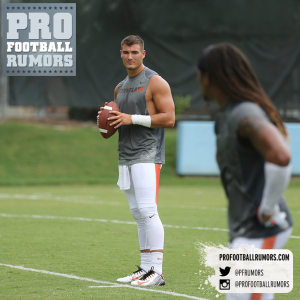 The team is both pondering a trade-up for the former Cleveland-area high school quarterback and selecting him at No. 1 overall, Mary Kay Cabot of cleveland.com reports. Cabot adds that the pro-Garrett vibes coming out of Sashi Brown‘s Wednesday press conference do not mean the team is going to take the defensive end, noting the Browns are “strongly considering” bypassing the Texas A&M sack artist and selecting Trubisky.

Cleveland’s line of thinking here is believed to be that the pro-Trubisky contingent within the Browns’ decision-making structure is uncertain he will be there at No. 12 and isn’t sure the team will be able to swing a trade back into the top 10 to select him. Sources informed Cabot the team is ready to select its quarterback of the future.

During the second-year GM’s pre-draft presser, Brown said the Browns have “just about finalized” their decision at No. 1. While that was believed to be interpreted as a sign the team was ready to take the best player available, sources told Cabot that Brown may have meant Trubisky is the emerging consensus choice.

Cabot also hears the 49ers are a threat to take Trubisky at No. 2 overall, and that the North Carolina-honed signal-caller won’t last past the Jets at No. 6. Manish Mehta of the New York Daily News reported earlier this month some Jets officials are high on Trubisky, and Matt Miller of Bleacher Report noted the team could serve as a trade partner for the Browns if they wanted to get back into the top 10.

If the Jets are entertaining the thought of using another high pick on a passer, the Titans hold the No. 5 pick. Tennessee had to surrender a 2016 third-rounder and 2017 second-round choice to Cleveland in order to move from No. 15 to 8 to select Jack Conklin. The price could be similar for the Browns, who have been more known for stockpiling draft picks than trading up for talent since the Brown- and Paul DePodesta-led front office took over.

The Browns have turned down offers for the No. 1 pick, Cabot reports, but after the team traded out of No. 2 last year and passed on Carson Wentz, it’s now poised to make that quarterback pick this year. Cabot adds that the Browns missing out on Trubisky would result in them moving on to Deshaun Watson or Patrick Mahomes — presumably with their No. 12 pick. Of course, a GM told NFL.com’s Charlie Casserly he believes two quarterbacks would go in the top nine selections. In that scenario, the Browns would have to trade back into the top 10 if they wanted to draft the second-best quarterback on their board.

This would wrap up another complex Browns pre-draft process. Reports about the Browns’ astronomical grade on Garrett and team brass being awed by his Combine showing eventually leading to a Trubisky pick would be quite interesting. As would the possibility that owner Jimmy Haslam, who was possibly connected to having made the decision to trade up for Johnny Manziel in 2014, being involved in the decision-making process, as La Canfora suggests he could be.