With the 16th pick in this year’s NFL draft, the Ravens could attempt to bolster an underwhelming receiving corps. The club has “considerable interest” in Western Michigan wideout Corey Davis, reports Aaron Wilson of the Houston Chronicle (Twitter link). 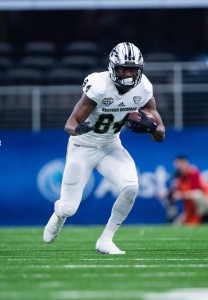 Even though Davis underwent ankle surgery in February and missed the scouting combine, it’s possible he’ll be off the board long before the Ravens are on the clock. Davis is nearly all the way back from the surgery, which bodes well for his draft stock. So does the 6-foot-3, 213-pounder’s production at the college level, where he hauled in 331 passes and 52 touchdowns over four years. Davis was at his best in 2016, finishing with personal highs in receptions (97), yards (1,500) and scores (19).

Landing Davis could be a pipe dream for Baltimore, but somehow adding him would be a boon to a Ravens team in need of more weapons in the passing game. Steve Smith retired after last season, leaving Mike Wallace as the only receiver on the Ravens’ roster with a significant track record of success in the pros. The 30-year-old Wallace is unsigned beyond next season, though, so his time with the club might be winding down.

Behind Wallace, the Ravens’ best option is Breshad Perriman, a first-rounder in 2015 who sat out his rookie season because of injury. Perriman stayed healthy last year and showed promise (33 receptions, 15.1 yards per catch and three TDs), but he wasn’t exactly a force. Meanwhile, the only other wideout on the Ravens’ roster who caught a pass last year, Chris Moore, totaled just seven receptions.

2 comments on “Ravens Have Strong Interest In Corey Davis”