When asked about a potential Richard Sherman trade, Seahawks GM John Schneider said “right now we’ve kind of moved past it,” as Bob Condotta of The Seattle Times tweets. However, he says would still consider a trade if a big offer comes his way. 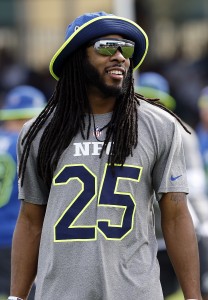 Schneider’s latest comments perhaps send a stronger statement than last week when he said that “odds are” Sherman would be staying put. Sherman reportedly asked out of Seattle, but the team has been unable to oblige that request so far. After originally asking for a first-round pick plus a quality player, the Seahawks lowered the ask to a 2017 first-round pick and a conditional mid-round pick in 2018. Still, no one has met the sticker price.

Now, the two sides are effectively stuck with each other as the draft closes in. If Schneider and Sherman are to be believed, then that’s not necessarily a problem. Both men say that their relationship is in good standing, so things just might be drama free from here on out.

Sherman is under contract with Seattle through the 2018 season.