Former NFL linebacker Stephen Tulloch will announce his retirement later this week, according to Justin Rogers of the Detroit News (Twitter link). 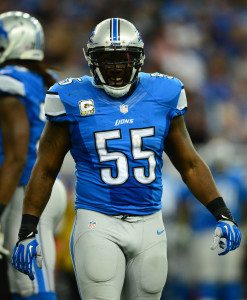 Tulloch, 32, entered the league as a fourth-round pick of the Titans in 2006. After serving as a backup during his first two seasons with Tennessee, Tulloch became a full-time starter in 2008 and never looked back, starting 107 games over the next eight years. He joined the Lions one a one-year deal in 2011, but played well enough to be handed a five-year extension in 2012.

Injuries plagued Tulloch during his final few years in Detroit, and he was ultimately released in 2016. Subsequently, he followed former Lions head coach (and current Eagles defensive coordinator) Jim Schwartz to Philadelphia, inking a one-year pact with the club last August. Tulloch played sparingly, however, seeing the field for just seven percent of the Eagles’ defensive snaps.

PFR wishes Tulloch all the best in retirement.

3 comments on “Stephen Tulloch To Retire”