The Broncos have engaged in “preliminary” contract negotiations with safety T.J. Ward, according to Troy Renck of Denver7. Ward is scheduled to become an unrestricted free agent in 2018. 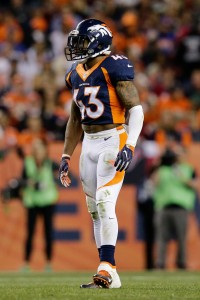 “I would love to finish my career here,” said Ward. “I’d like to see something get done. They have done that in the past with guys. I think I have proven myself. But if they think I need to show more, then I will just have to keep proving it to them.”

Ward, 30, originally joined the Broncos in 2014 after signing a four-year, $22.5MM deal. That pact has proven to be a bargain, as Ward has been among the league’s best safeties during that stretch. After earning Pro Bowl berths in 2014 and 2015, however, Ward posted something of a down season last year, as he graded as just the No. 50 safety among 90 qualifiers, per Pro Football Focus.

Denver has been proactive in locking up its secondary, as cornerbacks Aqib Talib and Chris Harris, plus safety Darian Stewart, are all under contract through at least the 2019 campaign. Nickel back Bradley Roby, meanwhile, is signed through 2018 after the Broncos exercised his fifth-year option.