Gary Barnidge left his early May visit with the Bills without a contract and roughly three weeks later he remains on the open market. Things could be picking up for the tight end, however. Barnidge tells SiriusXM (Twitter link) that he has heard from some of his old coaches that are now with the Broncos. 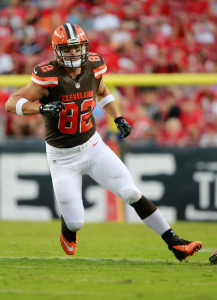 The Broncos added a big name at tight end when they selected Michigan’s Jake Butt in the fifth round. However, he has torn an ACL in each knee with the latest one happening during the Orange Bowl this past January. While Butt recuperates, the Broncos project to go into September with Virgil Green, Jeff Heuerman, and A.J. Derby as their top three tight ends. Barnidge could be added to the mix to help push Derby and/or Henry Krieger-Coble for the final TE spot on the 53-man roster.

Around the time of his visit to Buffalo, it was also reported that meetings with the Jaguars and Panthers could be on the docket. Barnidge confirmed that he has heard from the Jaguars, but it’s not immediately clear whether the Panthers still have interest.

Barnidge’s earned a Pro Bowl nod in 2015 as he hauled in 79 receptions and 1,043 yards and nine touchdowns. Last year, he caught 55 passes for 612 yards and two touchdowns for the Browns.

2 comments on “Broncos Reach Out To TE Gary Barnidge”