Likely having closed the door on a Colin Kaepernick addition after signing journeyman Austin Davis, the Seahawks may not have been deep into financial discussions with the 29-year-old quarterback’s camp. Mike Garafolo of NFL.com tweeted on Friday the Seahawks and Kaepernick were apart on money but took an opportunity Monday to clarify that wasn’t necessarily the case. 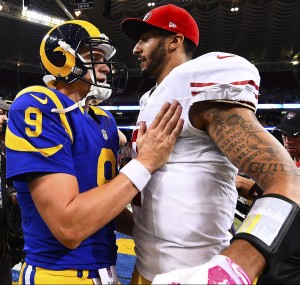 Garafolo reports Kaepernick and the Seahawks did not exchange formal offers. While the reporter notes (video link) the sides did discuss expectations of a contract before Kaepernick trekked to Seattle, but numbers-wise, the talks didn’t progress into detail beyond that.

ESPN.com’s Jeremy Fowler reported late last month the Seahawks were looking for quarterback help at closer to the veteran minimum, and Garafolo expects Davis’ deal to come in around that. Davis did not see any time last season as the Broncos’ third-string quarterback, and he eventually was waived in December. Garafolo and Steve Wyche note Davis isn’t a lock to wrest the backup job away from Trevone Boykin, either. Wyche also relays an NFL.com report that indicated more Seahawks fans called the team to voice negative opinions of a Kaepernick addition than vice versa.

A report emerged in March that Kaepernick was potentially seeking low-end starter/high-end backup money, but nothing substantial has come out on that front since. Kaepernick has seen several teams go elsewhere to fill their backup spots, with franchises like the Cowboys and now Seahawks bringing in less accomplished players, and the No. 2 signal-caller market for players like Kaepernick and Robert Griffin III continues to dry up.