How The Saints Can Replace Nick Fairley

The Saints officially placed defensive tackle Nick Fairley on the non-football injury list on Monday, ending Fairley’s 2017 season before it began and casting doubt on the future of his career. New Orleans already added one potential reinforcement earlier this month, agreeing to terms with veteran Tony McDaniel, but the club could still pursue more help on the interior.

Let’s take a look at the possible solutions for the Saints, beginning with players that could potentially be acquired via trade:

Arik Armstead, 49ers — Now that the 49ers have made several additions to their defensive line, Armstead — the 17th overall selection just two years ago — could become expendable. Free agent signee Earl Mitchell is projected to start at defensive tackle alongside 2016 first-rounder DeForest Buckner, but a trade of Armstead could allow Buckner to see more snaps on the edge opposite Solomon Thomas. Dealing Armstead could also allow San Francisco to get Aaron Lynch more playing time at end. At 6’7″, 292 pounds, Armstead has the size to play the interior in the Saints’ 4-3 scheme.

Desmond Bryant, Browns — Bryant doesn’t fit in with a Browns team that is going young, and he’s entering the final year of his contract. He’s eminently affordable (he’d cost the Saints just $3MM), and, like others on this list, has the ability to play on the edge and inside. Bryant’s health is a question mark, as he missed the entire 2016 campaign with a torn pectoral, but he returned to Cleveland’s practice field last month. It’s possible the Browns release Bryant later this summer, so New Orleans wouldn’t even have to sacrifice a pick.

Vinny Curry, Eagles — Curry may be the unlikeliest trade candidate listed here, especially given that he just signed a five-year, $46.25MM extension last February. But the Eagles haven’t been afraid to deal recently-signed players in the past (see: Sam Bradford), and trading Curry would allow Philadelphia to part with his $7MM guaranteed base salary. Listed as a defensive end, Curry is an excellent pass rusher from the interior, but the snaps haven’t been there with the Eagles (43% in 2016). With Chris Long now in tow, Curry could struggle to find consistent playing time again next season.

Carl Davis, Ravens — Heading into the 2015 draft, Davis was considered a potential first- or second-round selection, but the Ravens ended up picking him up in the third round. After struggling through 239 defensive snaps during his rookie campaign, Davis missed all of 2016 with an ankle injury. He’s now third on the depth chart at nose tackle behind Brandon Williams and Michael Pierce, meaning he could be superfluous. Only 25 years old, Davis is signed through 2018 at palatable rates.

Steve McLendon, Jets — Gang Green has already unloaded several notable veterans this offseason, and a rebuilding club like the Jets doesn’t particularly need to employ a run-stuffing defensive tackle earning nearly $3MM like McLendon. The 31-year-old McLendon played on roughly a third of New York’s defensive snaps a year ago, and that’s the type of reserve role he’d likely play for the Saints. A player-for-player trade could be a possibility here, as the Jets were the free agent runners-up for running back Travaris Cadet, whom New Orleans is now shopping.

Sheldon Richardson, Jets — I’ve banged the drum for a Richardson-to-New Orleans trade in the past, but had previously considered the former first-round pick as an ideal complement to Cameron Jordan at defensive end. The Saints didn’t do much to address their edge rushing problem, with free agent Alex Okafor and third-round selection Trey Hendrickson comprising most of the team’s attempted improvement. Richardson, then, would make a perfect candidate to play end in base packages before becoming an interior rusher on passing downs.

Arthur Jones — Jones, who will turn 31 years old later this week, managed to appear in only 17 games through three seasons after signing a five-year deal with the Colts prior to the 2014 season. While he’s typically served as a two-gapping, 3-4 defensive end throughout his career, Jones has the size (6’3″, 315 pounds) to play tackle for the Saints. Clearly, Jones has question marks, including severe health issues and a 2016 PED suspension, but those factors should make him come cheap.

Jared Odrick — While a number of clubs have expressed interest in Odrick this offseason, he hadn’t been on the Saints’ radar as of yet. That could change now that Fairley is lost for 2017, and Odrick offers a recent track record of success. Although his Jaguars tenure was not successful, Odrick was a high-caliber player for the Dolphins as recently as 2014. Additionally, Odrick still has youth on his side, as he’s entering just his age-29 season. 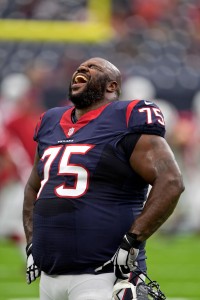 Vince Wilfork — As of earlier this month, Wilfork still hasn’t decided whether he wants to hang up his cleats, as he claims he’s “50-50” on the idea of retirement. At age-35, Wilfork wasn’t very effective last season, but the Texans may have been asking too much of him, as he played on roughly half the club’s defensive snaps. Perhaps he could still play a role for New Orleans if his workload was reduced, although Wilfork may wait to sign in order to avoid another training camp.

Dan Williams — Among available free agents, Williams earned the highest 2016 marks from Pro Football Focus, as he graded as the No. 44 interior lineman among 127 qualifiers. Although the 6’3″, 330 pound Williams is viewed as a massive space-eater, PFF actually assigned him much higher marks for his pass rushing acumen than his run defense. As such, Williams could possibly push the pocket a bit, but his main goal would still be to clog the middle.

I recently ran down the best available players at each defensive position. Other free agents of interest could include: Tyson Jackson, Tony Jerod-Eddie, Sen’Derrick Marks, Roy Miller, Devon Still, and Vance Walker.

One comment on “How The Saints Can Replace Nick Fairley”