Myles Garrett did not complete the Browns’ three-day minicamp, sitting out the final day before leaving Cleveland while in a walking boot after suffering an injury Wednesday. But the team shed some light on the No. 1 overall pick’s situation on Saturday. 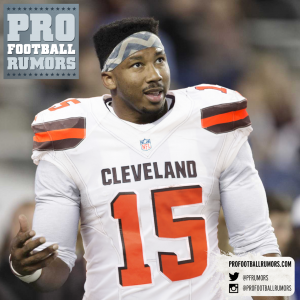 The former Texas A&M phenom suffered a left lateral foot sprain, the team revealed (via Mary Kay Cabot of cleveland.com). Two doctors confirmed the diagnosis, per Cabot, who adds the Browns expect him to be ready for training camp. Rookies report to Berea, Ohio, on July 25, giving Garrett just more than five weeks to recover.

Garrett suffered the injury while rushing Brock Osweiler in a two-minute setting. The Browns excused the defensive end from the last day of minicamp Thursday and from attending a youth clinic with the team’s rookies at FirstEnergy Stadium a day later. The team hoped Garrett avoided structural damage, and it appears he has. But the injury to the left foot could be a sign of concern because of the left ankle trouble he had during the 2016 season.

Garrett missed some time during OTAs with a sore foot but had left ankle trouble last season while at Texas A&M. The high ankle sprain limited Garrett to 10 games as a junior. He registered 8.5 sacks, which were a career low, and 4.5 of those came against Texas-San Antonio.

One comment on “Myles Garrett Diagnosed With Foot Sprain”