The Patriots’ top pick is officially under contract. Defensive end Derek Rivers has inked his rookie deal, according to his agents (on Twitter). 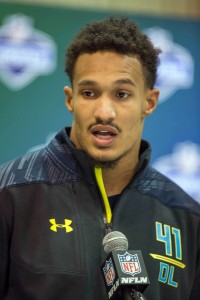 The Pats selected Rivers with the No. 85 overall pick in the draft, their top selection thanks to the Brandin Cooks trade with New Orleans. The Youngstown State product finished school in style, tallying 14.0 sacks and garnering attention from talent evaluators all over the league. Rivers could be a factor at defensive end behind Kony Ealy and Trey Flowers this year, but we could also see him get some reps at outside linebacker where he can learn from Rob Ninkovich.

The Patriots have now signed all four members of their 2017 draft class. Here’s the full rundown of New England’s rookie class: