The Chiefs have signed their first-round pick, quarterback Patrick Mahomes, reports Terez A. Paylor of the Kansas City Star (Twitter link). It’s a four-year deal worth a guaranteed $16.4MM, including a $10MM-plus signing bonus. 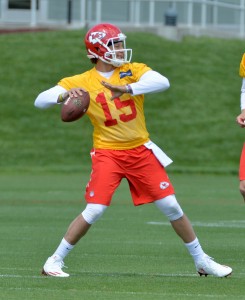 Mahomes, the 10th overall selection, went to the Chiefs after they paid a heavy price in a deal with the Bills to move up for him. Kansas City was originally in line to pick 27th, but then-general manager John Dorsey boldly packaged that choice with a third-rounder this year and a first-rounder in 2018 to go up 17 spots for Mahomes. In doing so, Dorsey surrendered a whopping 170 cents on the dollar, according to Chase Stuart of Football Perspective.

Formerly a star at Texas Tech, where he combined for 93 touchdowns, 29 interceptions and 11,252 yards from 2014-16, Mahomes will sit behind veteran Alex Smith initially. But if the Chiefs, who went to the playoffs for the third time in four tries under Smith in 2016, don’t take a step forward this season, Mahomes could grab the reins under center by 2018. The Chiefs have gone just 1-3 in the playoffs with Smith at the helm (they were one and done last winter after a 12-4, AFC West-winning campaign), and releasing him after the season would save the team $17MM of his $20.6MM cap hit in 2018 – the final year of his contract.