There has been no movement on an extension between the Redskins and Kirk Cousins, Charles Robinson of Yahoo Sports tweets. A deal is not close and there will not be an agreement until someone budges between now and Monday, Robinson adds. 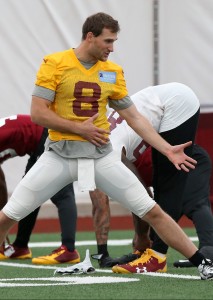 This latest report is consistent with what we’ve been hearing about talks between Cousins and the Redskins in recent weeks. As of this writing, it sounds like there won’t be extensions ironed out for Cousins, Steelers running back Le’Veon Bell, or Rams cornerback Trumaine Johnson. But, we have to throw in the obvious caveat – things can always change and deadlines tend to spur action.

Cousins has indicated that he is looking to reset the market on a new multi-year deal and he will not be giving the Redskins any form of a hometown discount. In fact, there are rumors that Cousins is extremely unhappy in the nation’s capital and that might mean that there is no amount of money the Redskins can offer him to get him to stay.

Redskins has been hit with the one-year, $24MM franchise tag, representing a 20% increase over the franchise tender he earned in 2016. The Redskins can conceivably retain Cousins again in 2018 with a third straight franchise tag, but that would call for a salary of $34MM. Alternatively, they could control him with the transition tag, but that would still set the Redskins back $28MM and would not entitle them to any form of compensation if he is signed away by a rival club. When considering the combined values of this year’s franchise tag ($24MM) plus the value of a transition tag next year ($28MM), Cousins’ camp must be seeking no less than $52MM in guarantees on a fresh contract.