Mo Alie-Cox‘s dream of switching from the hardwood to the gridiron took a bit of a hit on Saturday, as the Colts announced that they have waived-injured the former Virginia Commonwealth University forward. The team has signed tight end Steven Wroblewski to take the open roster spot. If Alie-Cox passes through waivers, he’ll land on the Colts injured reserve. 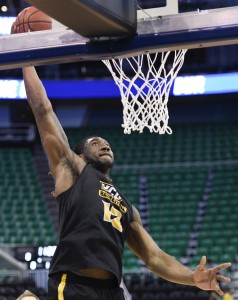 The 6-foot-6, 250-pound Alie-Cox played four seasons on VCU’s basketball team, but he decided to pursue an NFL career following graduation. Considering his height, the player was signed as a tight end, although he allowed teams to audition him at a variety of different positions during his spring workout. He ultimately decided to sign with the Colts in April.

His lack of football experience predictably made him a project, so it might not necessarily be a bad thing if Alie-Cox slips through waivers and has a “red shirt year” on the IR. On the flip side, an assortment of teams had interest in the prospect, including the Buccaneers, Seahawks, Jets, Eagles, and Chargers (via Zak Keefer of IndyStar.com). There’s always a chance one of these teams is willing to take the gamble and claim the 23-year-old.

Wroblewski, an undrafted rookie free agent out of Southern Utah, spent time with the Cardinals earlier this offseason. In 21 games between 2015 and 2016, the tight end hauled in 63 catches for 770 yards and three touchdowns. Wroblewski will presumably replace Alie-Cox’s spot on the depth chart behind Jack Doyle, Erik Swoope, and Brandon Williams.