Kraig Urbik‘s knee injury was expected to keep him out of Week 1, but the malady may either be more severe or the Dolphins have decided not to wait it out. Miami released the guard with an injury settlement, Adam Beasley of the Miami Herald tweets. 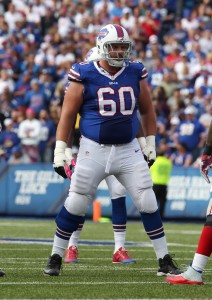 Urbik was expected to start at guard after Ted Larsen‘s biceps injury, but the former Bills starter will not factor into that equation as of now. The recent knee setback Urbik sustained was only supposed to keep him out for a few weeks, post-arthroscopic surgery, but he will be on his own for the time being.

While Urbik could conceivably be brought back after he recovers, this will move the Dolphins to younger players as they continue to search for answers at guard.

The 31-year-old Urbik signed with the Dolphins in 2016 after six seasons with the Bills. He started six games last season and was expected to be the team’s No. 2 option at guard after Larsen’s setback. Now, that could fall to third-year man Jesse Davis or fourth-year player Anthony Steen. A seven-game starter last season at center, Steen started in Miami’s third preseason game. Davis entered the game after a few possessions.