Lions defensive end Kerry Hyder is out for 2017, a source tells Ian Rapoport of NFL.com (on Twitter). Hyder suffered an Achilles tear during Sunday’s preseason game against the Colts and doctors confirmed the injury on Monday morning. 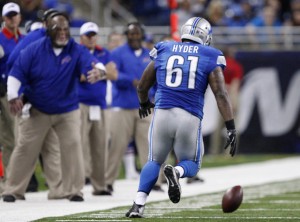 Losing Hyder represents an enormous blow to a Lions defense that was already thin on quality depth at the edge position. Hyder, 26, played 655 defensive snaps a year ago (second-most among Detroit defensive linemen), and posted eight sacks and 36 tackles during that time. Pro Football Focus graded Hyder as the No. 42 defensive end in the league in 2016, the highest rank among Lions edge defenders.

Even with Hyder on board, Detroit’s defense struggled last season. Overall, the unit ranked dead last in DVOA while finishing 21st in adjusted line yards and 25th in adjusted sack rate. If Hyder is sidelined for the year, free agent addition Cornelius Washington, draft picks Jeremiah Ledbetter and Pat O’Connor, plus incumbent Brandon Copeland, could be called on to play more snaps opposite Ezekiel Ansah. Veterans Armonty Bryant and Khyri Thornton, too, should play a larger role once they return from suspension.

If the Lions decide to scour the free agent market for a replacement, there are options available. Dwight Freeney, Eugene Sims, Trent Cole, Paul Kruger, and Mario Williams look like the best true edge rushers, while players such as Tyson Jackson and Jared Odrick are capable of playing both end and tackle.

3 comments on “Lions DE Kerry Hyder Out For Season”