Tramaine Brock‘s market is heating up. The Texans and Vikings are now among the teams with interest in the free agent cornerback, Jason La Canfora of CBSSports.com (Twitter links) hears. La Canfora adds that it is “very likely” he will sign somewhere this week. 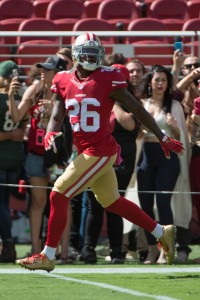 Brock is already meeting with the Seahawks and Seattle is very serious about signing him after four months of investigative work into the domestic violence allegations against him. After charges were dropped against Brock and his alleged victim characterized the incident as a verbal dispute rather than a physical one, teams seem to be more comfortable with the idea of adding him to the roster.

The Texans have been putting an emphasis on causing turnovers and Brock, who has eleven career interceptions, can help with that pursuit.

“One of the things we talked about as soon as we got back for OTAs is creating turnovers,” cornerback Kareem Jackson said (via ESPN.com’s Sarah Barshop). “We feel like as a defense unit, that’s our job, to create turnovers. If we can improve on that as well as continue to get better in some of the other defensive categories and situational football, [we will] continue to progress as a group.”

Brock, 28, has been a full-time starter in each of the past two seasons. Last year he graded out as the league’s No. 23 corner while playing 95% of San Francisco’s defensive snaps, according to Pro Football Focus.