Cairo Santos sustained a groin injury during his last warmup kick against the Chargers this weekend. It may well end up being his final kick as a Chief. 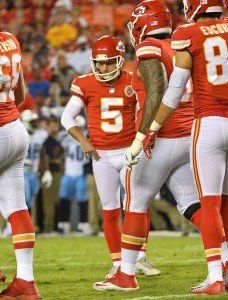 The Chiefs waived Santos with an injury designation on Saturday, the team announced. He is expected to be healthy later this season, per Ian Rapoport of NFL.com (on Twitter), so the fourth-year kicker will now be able to land with another team. The Chiefs placed Santos on IR earlier this week, clearing the way for their claim of rookie Harrison Butker off the Panthers’ practice squad.

Butker did not beat out Graham Gano for Carolina’s kicking job out of camp, but the Panthers used a seventh-round pick on the Georgia Tech product. It looks like the Chiefs will be turning to Butker for the time being.