Falcons linebacker Vic Beasley is expected to miss about a month with a hamstring injury, a source tells Zach Klein of WSB (on Twitter). Beasley suffered the injury during Sunday night’s 34-23 win over the Packers. 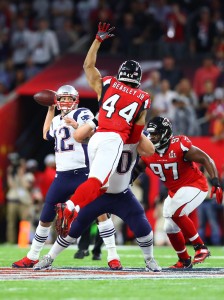 The 25-year-old led the league with 15.5 sacks in 2016, earning a Pro Bowl nod and a First Team All-Pro selection. He also played a major role in Atlanta’s nationally televised win over Green Bay, including his bone-crushing hit on Aaron Rodgers in the third quarter which led to a defensive TD.

Defensive end Courtney Upshaw was sidelined for Week 2 with an ankle injury, so the Falcons’ front seven could be particularly thin when they face the Lions on Sunday. In the meantime, the Falcons will have to lean a little more heavily on Derrick Shelby, Adrian Clayborn, and first-round pick Takkarist McKinley. Since Beasley and Upshaw are facing only short-term absences, they may not have the roster room to add an impact edge rusher.