The NFL has not discussed a possible settlement with Cowboys running back Ezekiel Elliott‘s attorneys, according to Tom Pelisserio of NFL.com (Twitter link). 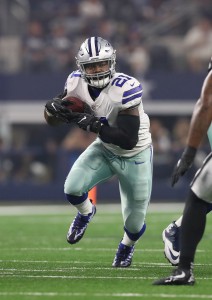 Elliott, who is facing a six-game suspension stemming from domestic violence allegations, will be uniform when Dallas faces the Rams on Sunday, as the Fifth Circuit Court of Appeals will begin deliberations the following Monday. A three-judge panel — one that holds a pro-business view that could favor the NFL, per Mike Florio of Pro Football Talk — will decide whether Elliot’s injunction against the league was filed within the correct jurisdiction.

The NFL will essentially argue that Elliott’s case was the “wrong suit in the wrong court at the wrong time,” tweets David Moore of the Dallas Morning News. If the court rules from the bench (something a source tells Florio to expect) and dismisses the injunction, the case will be sent to New York federal court, where the league already filed a lawsuit.

Elliott, for his part, is reportedly not willing to accept any settlement that would involve accepting any blame. The NFL, meanwhile, won’t absolve him, so there is apparently no middle ground where an agreement could be struck.