Cobi Hamilton was a fixture in the Steelers’ receiving corps in 2016, but he won’t be a member of the group this year. The team has released the wideout, Jeremy Fowler of ESPN reports. 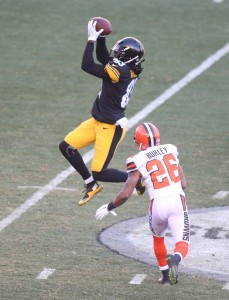 Thanks largely to superstar Antonio Brown, the just-reinstated Martavis Bryant, second-round pick JuJu Smith-Schuster and Eli Rogers, the Steelers are deep at receiver. With those four serving as locks to make the team, Hamilton joined a few other familiar Steelers receivers who vied to stay on their roster during the preseason. It wasn’t to be for the 26-year-old Hamilton, a sixth-round pick of the AFC North rival Bengals in 2013 who didn’t catch a pass in Cincinnati but made somewhat of an impact in Pittsburgh.

In 2016, his lone season with the Steelers, Hamilton started in eight of 11 appearances and caught 17 passes for 234 yards and two touchdowns. He added another four receptions and a TD in three playoff games last January.

Also a former Eagle, Dolphin and Panther, the well-traveled Hamilton’s next NFL organization will be his sixth.