Despite reaching an agreement to re-sign Nick Novak in March, the Texans will move on from the veteran kicker. Houston released Novak on Saturday, Mark Berman of Fox 26 tweets. 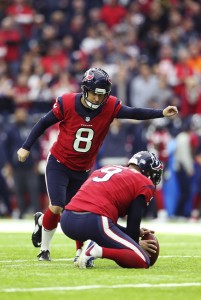 Novak kicked for the Texans for both of their past two AFC South-winning teams, but it appears the franchise will opt for second-year specialist Ka’imi Fairbairn. The Texans signed Fairbairn as a UDFA out of UCLA in 2016, but Novak won last summer’s kicking competition. A year later, the 23-year-old Fairbairn looks to have prevailed in the rematch after spending a season on IR.

The 36-year-old Novak signed a one-year, $1.15MM deal with a $250K signing bonus. The former longtime Chargers kicker hit 85.4 percent of his attempts last season, a tick above his career average.

Novak figures to receive interest in free agency after being a regular kicker for the past six seasons.