Browns stalwart left tackle Joe Thomas suffered a torn triceps in Sunday’s loss to the Titans and will miss the remainder of the season, according to Mary Kay Cabot of Cleveland.com. Ian Rapoport of NFL.com (Twitter link) was the first to report Thomas had likely torn his triceps. The Browns have since placed Thomas on injured reserve. 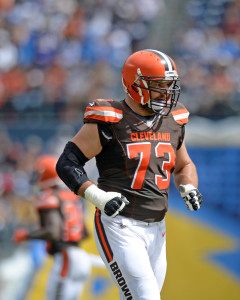 Thomas, 32, had not missed a single offensive snap since entering the league as a first-round pick in 2007. That streak is now over at 10,363, but that figure stands as a testament to Thomas’ amazing consistency and resiliency. And Thomas, a nine-time All Pro, hasn’t yet hit a decline, as Pro Football Focus ranked him as the No. 3 offensive tackle in the league through seven weeks.

The winless Browns turned to Spencer Drango to replace Thomas on Sunday, making the 2016 fifth-round selection the first player other than Thomas to man left tackle in Cleveland since 2006. Drango will presumably continue on the blindside for Cleveland — which ranks a mediocre 18th in both adjusted line yards and adjusted sack rate — but the Browns could also conceivably take a look at fellow tackle Zach Banner, a fourth-round rookie whom Cleveland acquired off waivers from Indianapolis.

With Thomas done for the year, any chance of the Browns reaping draft pick compensation for him via trade is eliminated. Cleveland reportedly had “no intention” of dealing Thomas, who has been oft-mentioned in trade rumors given the Browns’ lack of success on the field and his status as the club’s best player, and Thomas’ health questions would render any theoretical discussions moot. Thomas is signed through the 2018 season, and has a $8.8MM base salary on the books for next season.