The Cardinals’ IR has become flush with big names. Carson Palmer joined that contingent officially on Thursday. The team announced the placement of its starting quarterback on IR. 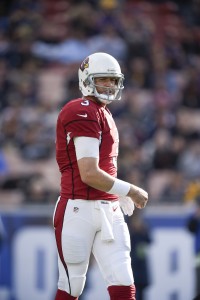 This will put Palmer out for at least eight weeks, with the Cardinals’ Christmas Eve game against the Giants being the earliest the veteran passer could return.

Palmer suffered a broken arm in the Cardinals’ loss to the Rams on Sunday, and while Bruce Arians said this week Palmer believed he could return sooner, the 15th-year signal-caller is on the shelf for the mandated eight weeks. This timeline could well mean Palmer’s season is over. And given that he didn’t announce he was returning to the Cardinals until the offseason was well underway, it shouldn’t be assumed Palmer will return to football.

The Cardinals are 3-4 and vying for playoff positioning out of a competitive division. The Rams lead the NFC West at 5-2, and the Seahawks — qualifiers for five straight NFC playoff brackets — are 4-2 with a road victory over the Rams. Arizona is now without its top quarterback, running back and offensive lineman, with David Johnson and Mike Iupati also on IR.

Arizona can bring Johnson or Iupati back earlier, but the Cardinals falling out of the race would presumably induce the team to err on the side of caution and give the younger talents a fresh start going into the 2018 season.

Palmer is under contract through next season and set to count $20.625MM against the Cardinals’ cap. He contemplated retirement after last season but opted to return. The former Heisman Trophy winner has suffered multiple severe knee injuries, the second damaging the 2014 Cardinals’ hopes. This latest malady figures to induce more deliberation from the passer about his future.