Working his way back from another significant injury, Delvin Breaux returned to Saints practice on Friday, Nick Underhill of The Advocate reports. 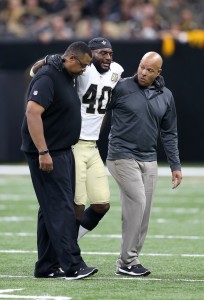 Breaux spent the first six weeks out of practice, per NFL IR-DTR rules, but is eligible to return for the Saints’ Week 9 game. The Saints are planning on bringing Breaux back from IR, and the third-year cornerback is on or ahead of schedule, Sean Payton said (via NOLA.com’s Josh Katzenstein, on Twitter).

The third-year corner went on IR before the season due to a fractured fibula, the second time he’s broken a bone in his leg in as many years.

New Orleans has won three straight and boasts an improved defense, one that would stand to be strengthened by Breaux’s return. First-round pick Marshon Lattimore and ex-UDFA Ken Crawley each rate as top-10 corners in the view of Pro Football Focus, representing a positive change for the Saints. Breaux was a well-regarded player in 2015 after a CFL career but struggled to shake off his leg injury last season.