Vikings rookie running back Dalvin Cook is believed to have suffered a nearly complete ACL tear, according to Ian Rapoport of and Tom Pelissero of NFL.com (Twitter link). An MRI on Monday will confirm the severity of Cook’s knee issue. 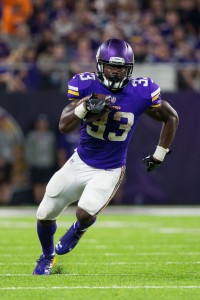 Cook has been revelation for Minnesota since the Vikings traded up to acquire him in the second round of the 2017 draft. The Florida State product had averaged 4.7 yards per carry heading into Week 4, and had also added 10 receptions for 82 yards through the air. Cook’s only real negative had been his pass-blocking, as he ranked No. 27 among 28 qualifiers in that capacity, per Pro Football Focus. All told, Cook had been on the field for roughly 70% of the Vikings’ offensive snaps.

If Cook is lost for the season, Minnesota does have internal options readily available. Veteran Latavius Murray signed a three-year, $15MM deal with the Vikings in March, but has barely seen the field thanks to Cook’s presence. He offers experience, however, as he’s toted the ball more than 550 times in his NFL career. Jerick McKinnon is on the roster, too, and would presumably take over third-down work. Bronson Hill, an Eastern Washington product, is a candidate for a potential practice squad promotion.

The Vikings could look to the free agent market in search of another running back, although no unsigned player is likely to replace Cook’s electricity. Tim Hightower, Ryan Mathews, Shaun Draughn, C.J. Spiller, and DeAngelo Williams are among the veterans available for an immediate signing. A trade could also be possible, and candidates for a deal speculatively include Matt Forte, Jeremy Hill, and former Viking Adrian Peterson.

Cook isn’t the only critical Minnesota offensive player who’s suffered a knee injury this year, as quarterback Sam Bradford experienced swelling following Week 1 and hasn’t played since. With backup Case Keenum leading the offense, the Vikings have posted a 1-2 record and are now 2-2 on the season.