After suffering a career-threatening knee injury in 2016, Vikings quarterback Teddy Bridgewater is confident he’ll see the field this season. The signal-caller returned to practice on Wednesday, and he told NFL Network’s Tom Pelissero that he “didn’t feel rusty at all.” 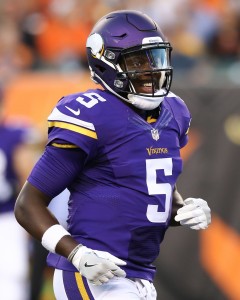 “I’m very confident. I wouldn’t go out on that practice field if I wasn’t,” Bridgewater said (via NFL.com’s Marc Sessler). “I definitely believe I’ll play this year. It’s going to take some grit. That’s just the mindset.”

The quarterback also told Chris Tomasson of the St. Paul Pioneer Press that he could have practiced several weeks ago had he been eligible to come off the injured reserve (Twitter link). After having torn his ACL last August, there were some reports stating that Bridgewater’s career could be in jeopardy. Instead, the 24-year-old ultimately returned to the field in less than 14 months. Bridgewater was officially cleared to practice earlier this week.

Sam Bradford was acquired by Minnesota last season and has filled in admirably during Bridgewater’s absence. Last season, the former first-overall pick completed a league-leading 71.6-percent of his passes for 3,877 yards, 20 touchdowns, and five interceptions. He completed 32 of his 43 attempts for 382 yards, three touchdowns, and no interceptions in two games this season, but he’s struggled through injuries for much of the campaign. Case Keenum has been solid filling in, throwing for 1,134 yards, five touchdowns, and one interception.

While the Vikings may not be eager to rush Bridgewater back this season, there’s no denying he’d be vying for the starting gig in 2018. Bridgewater’s last full season came in 2015, when he threw for 3,231 yards, 13 touchdowns and nine interceptions. The former first-rounder also ran for 192 yards and three touchdowns on 44 carries.