TUESDAY, 7:20pm: Vikings head trainer Eric Sugarman has released a statement indicating that quarterback Teddy Bridgewater has suffered a torn ACL. Although the statement did not confirm a timetable, Bridgewater is still expected to miss the 2016 season. 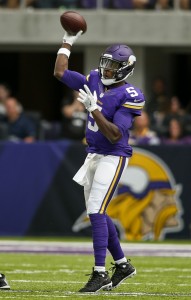 “Teddy Bridgewater suffered a non-contact injury today at practice,” said Sugarman. “The injury was quickly identified as a dislocated knee. The injury was stabilized, and he was transported to a nearby hospital for treatment and evaluation. After undergoing an MRI, it was determined that Teddy suffered a complete tear to his ACL and other structural damage.

Fortunately, there appears to be no nerve or arterial damage. Surgical repair will be scheduled within the next few days. Although the recovery time will be significant, we expect Teddy to make a full recovery. I would like to thank all of the medical professionals and our athletic training staff for all of their help today. Teddy has already displayed the attitude needed to overcome this injury and attack his rehab.”

As it currently stands, the Vikings have veteran Shaun Hill on the depth chart. Hill offers experience, but he is an uninspiring starting option for a team with playoff aspirations. He also has never started more than 10 games in any given season. Other than Hill, the Vikings have Wisconsin product Joel Stave on the depth chart. Fellow signal-callerTaylor Heinicke has been placed on the NFI list with an injury.